During his recuperation he began to consider climate change, which was just beginning to emerge as an environmental  issue, mulling over natural processes such as carbon sequestration, and working on ways of calculating the impact made by humanity in terms of CO2 emissions. He inspired the owner of the Castle Cary pet shop, Maureen, who asked him to plant a tree to offset the carbon footprint of her pet supplies shop, effectively trading the first tonne of carbon for £3 in 1988.  Last year (2014) carbon traded $142 billion, predicted to rise to $1 trillion by 2020. Maureen’s tree, a Whitebeam, has matured into a fine specimen standing in a field above Castle Cary train station. Morrell thought that the name carbon sequestration did not communicate the process well and it was at this point he came up with the term – Carbon Neutral.

Shortly afterwards Morrell made the acquaintance of Rodney Bickerstaffe, leader of the trade union Unison, while on a train journey. Bickerstaffe was taken with the idea and promised to share it with his union members via their newsletter. A few weeks later Morrell received a cheque in the post from a docker in Hull, asking him to plant a tree for him to offset his carbon footprint. More cheques arrived and when the stream turned into a flood Morrell established a company called The Reforestation Britain Campaign, thereby becoming director of arguably the first ever business to address the consequences of global warming. Initially Morrell wanted to establish the campaign as a charity, but the Charities Commission objected that by planting trees and not harvesting them the campaign would effectively be giving away its assets in contradiction of CC rules. 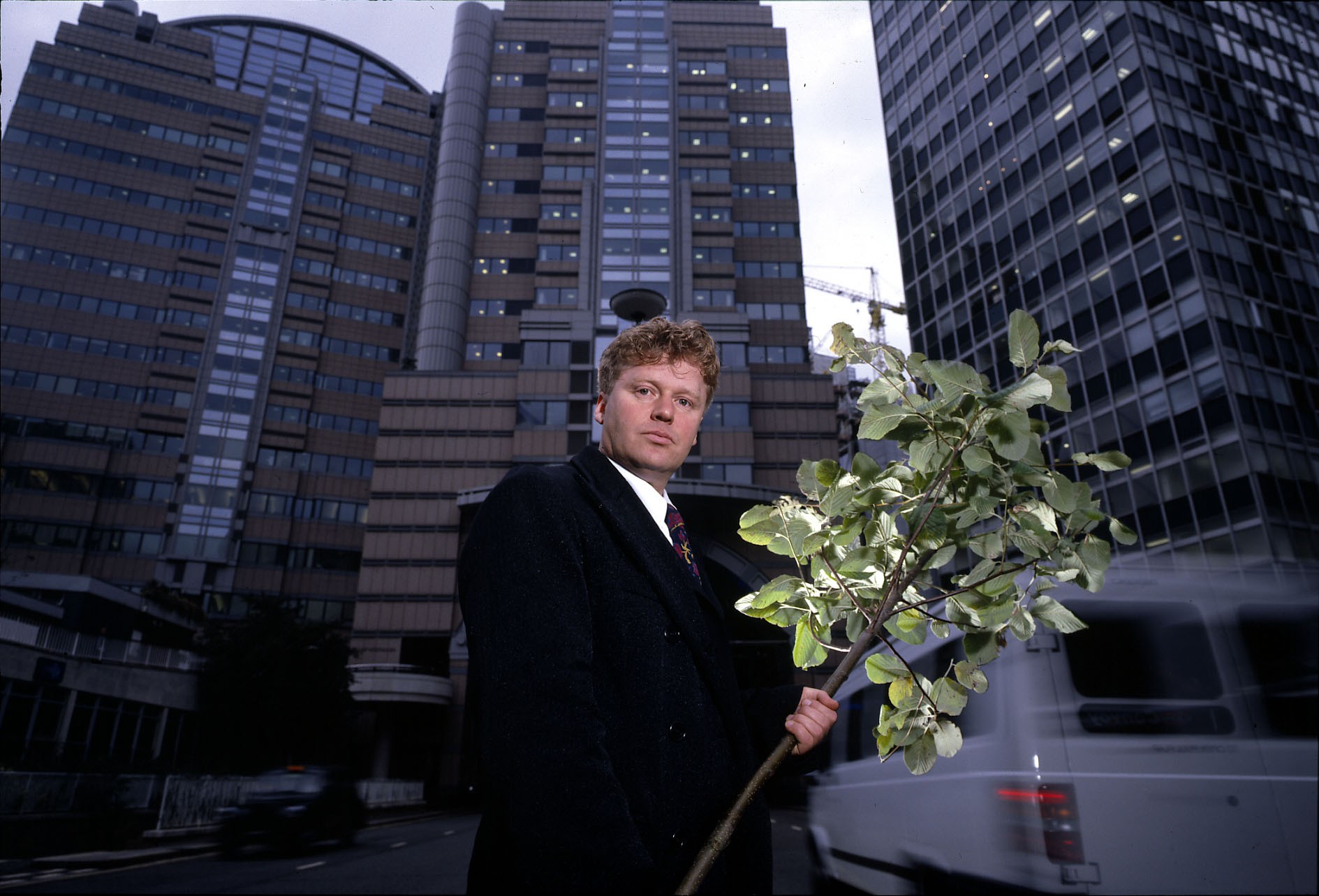 Morrell went on to found Future Forests in 1992, providing a way for businesses to ‘go green’. The original system involved a payment of £3 per tree – £1 for a sapling, £1 for tree management and £1 towards running Future Forests. This model later changed to £1 for four saplings, ensuring at least one survived to maturity at an average maturation rate of 4:1. This was before there was any methodologies for carbon absorption per hectare of land and was the first testing and experimentation in this arena. Morrell’s reforesting activities have led to the planting of over 13 million trees, with forests on every continent save for Antarctica.

Throughout the 1990s Morrell developed Future Forests, later renaming it as The Carbon Neutral Company in 2003. As he was getting Future Forests off the ground in 1995, Morrell met Joe Strummer at Glastonbury Festival. Strummer was very supportive of the idea and instantly committed to becoming a carbon neutral citizen. Strummer’s spontaneous support proved a tipping point. Such was the admiration and respect that he commanded; many others were eager to follow his lead. From that point it was the leadership of the artistic community that amplified the idea of Carbon Neutral in the public domain. Following Strummer, artists such as The Rolling Stones, Pink Floyd and Leonardo Di Caprio led by example and committed to becoming Carbon Neutral, as did Roland Emmerich who made his film ‘The Day After Tomorrow’ Carbon Neutral. Major recording artists followed suit resulting in well over 100 million Carbon Neutral CDs. At this stage big business finally took notice and over four hundred and fifty corporations such as Avis, HSBC and Mazda developed Carbon Neutral programmes with Morrell.

Future forests carbon- Damien Hirst on a CO2 canister Cage that he will constructive the down as an art piece to symbolise what Dan is doing by trapping CO2 in trees.

This is the first public update on the forests. Since this was published there have been requests to plant trees in Jones Forest again. 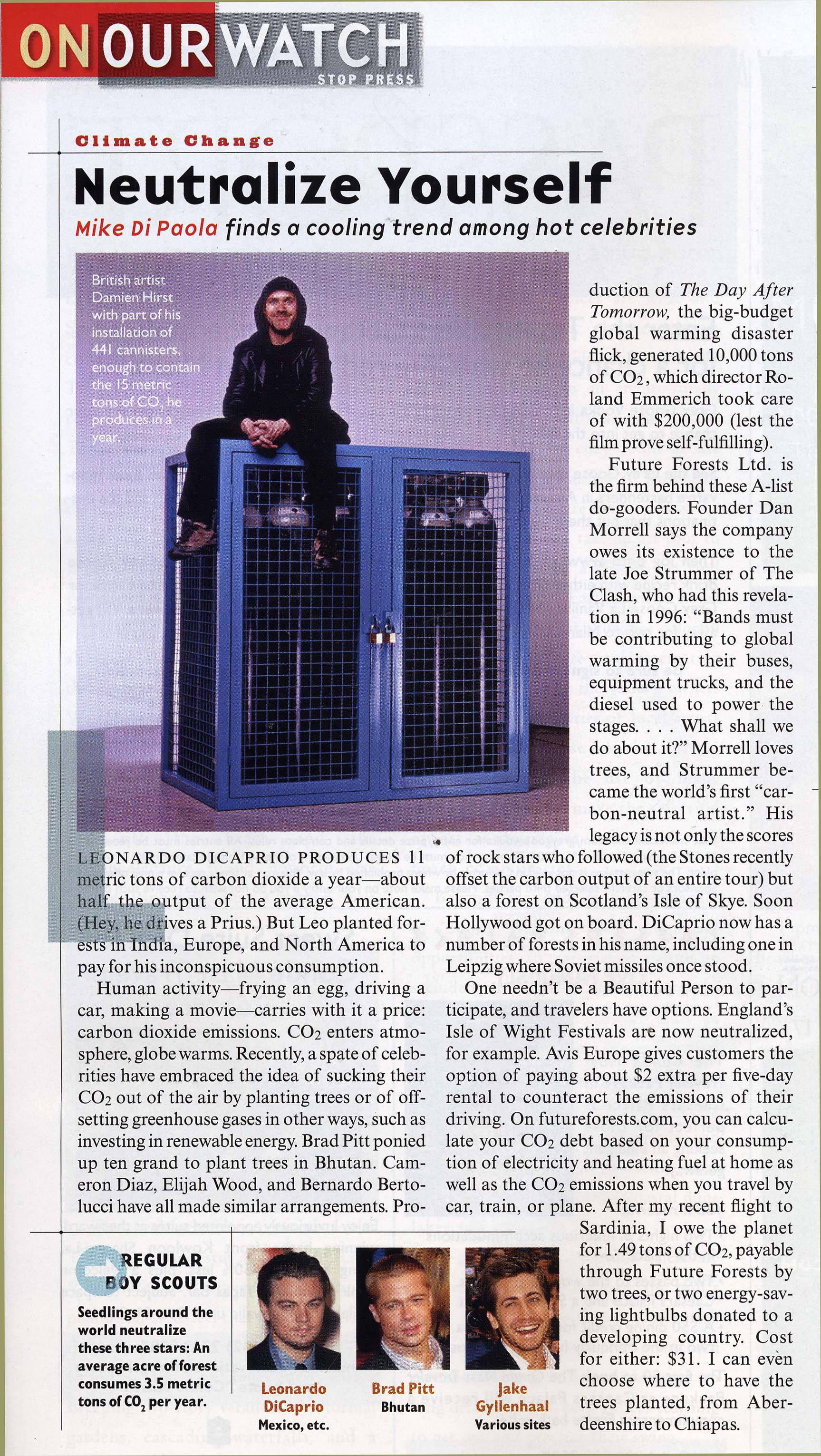